On Friday, January 10, 2020, two-year-old Sumatran tiger brothers, Rocky and Jaggar arrived at the Greensboro Science Center (GSC) from Florida’s Jacksonville Zoo. The pair is currently being housed behind the scenes as they acclimate to their new surroundings. An exhibit debut date has not yet been determined.

Jessica Hoffman-Balder, the GSC’s VP of Animal Care and Welfare says, “Rocky and Jaggar arrived safe and sound Friday afternoon. They did very well with transport and settled in quickly to their new home.”

The GSC’s tiger exhibit has gone through extensive renovations over the past two years. The original holding facility was completely rebuilt to support a breeding pair of tigers, which allows the GSC to actively participate in the Sumatran tiger Species Survival Plan (SSP) in the future. The new building features four individual rooms that can be combined as needed to form larger rooms. This allows for a future denning space – as well as a separate area for mom and cubs if a breeding recommendation is received from the SSP.

The exhibit space itself has also seen significant changes. Waterfalls, bridges, rocks, scratching posts, climbing structures, shade structures and a cave have all been recently added. In addition to providing guests with a more aesthetically pleasing view, animal care staff hope these changes will provide the animals with plenty of mental and physical stimulation.

Rocky and Jaggar will spend the foreseeable future adjusting to their new home and keepers. They’ll slowly be granted access to the exhibit space to explore their surroundings while the GSC is closed. Once the animal care team is confident the animals are well adjusted and ready to meet the public, an official opening date will be announced.

On December 11, 2018, the Greensboro Science Center’s (GSC) 5-year-old female maned wolf, Anaheim, gave birth to four puppies. This is the fourth time she and 11-year-old Nazca (the GSC’s adult male maned wolf) have been recommended to breed by the Association of Zoos and Aquariums’ Maned Wolf Species Survival Plan. This litter, comprised of two males and two females, is the second successful litter from the pair. 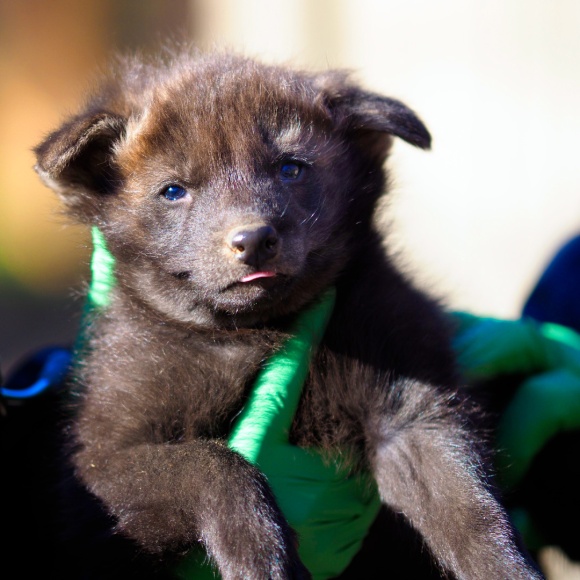 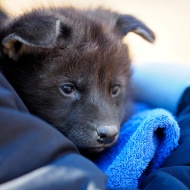 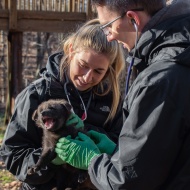 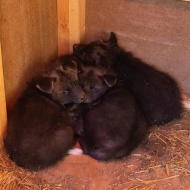 The maned wolf exhibit has been closed since early December as keepers began “pup watch”. During this time, Lauren Davis, the GSC’s Wolf String Lead Keeper, has worked to ensure that Anaheim’s four den boxes (two inside and two outside) are well-heated and filled with appropriate bedding. She has also installed Bluetooth baby monitors in the outside den boxes so she can monitor the mother wolf from a distance. Closing the exhibit to guests has provided Anaheim with a quieter, calmer environment in which to give birth and raise her new family.

Davis says, “Sometimes, we are able to observe the breeding behaviors, which allows us to count the days and determine a solid window for when Anaheim will give birth. For the last two years, though, the wolves have been very secretive, so it’s up to me to be observant of her body condition and behaviors.”

As a part of their ongoing care, the wolves are weighed once each month. If Davis sees Anaheim exceeding her normal weight range, she begins weighing the animal weekly to get a more accurate estimate for a potential due date. Davis says Anaheim also becomes very pushy when pregnant. During the last half of pregnancy, Davis looks for a round belly and visible teats as milk develops.

“This year, I was about 2 weeks off,” Davis says. “I thought she would have Christmas babies, but when that huge snow storm was rolling in, she started to look very, very round. It is not unusual for animals to give birth during bad weather, so I knew it would be that weekend — and I was right!”

Davis says Anaheim is currently doing well taking care of four hungry mouths and Nazca is a fantastic father. She says, “He is protective and does a very good job supporting Anaheim. Once the pups get older, he will regurgitate for them and play with them, but for now his job is to stay out of the way and make sure I don’t mess with his family.”

The pups received their first veterinary exam on Thursday, January 10. Each wolf was thoroughly examined, microchipped and weighed, and all received a clean bill of health from the GSC’s veterinary team. The pups will receive their first vaccines in about two weeks, followed by routine exams every three weeks until they are 12 – 14 weeks old.

The maned wolf exhibit will reopen to the public on Monday, February 11. The pups may or may not be visible immediately after reopening, as they will continue to spend much of their time in their den boxes until they get a little older.

The mission of an Association of Zoos and Aquariums (AZA) cooperatively managed Species Survival Plan® (SSP) Program is to oversee the population management of select species within AZA member institutions (i.e., AZA-accredited zoos and aquariums, Conservation Partners, and Certified Related Facilities (CRFs)) and to enhance conservation of this species in the wild.

It’s Valentine’s Day, and love is in the air! Whether it’s love for your partner or a friend, or it’s love for your own wonderful self, you probably won’t be able to escape thinking about it for at least a few minutes (…sorry!). In the spirit of love, we wanted to use today’s blog to hone in on the Association of Zoos and Aquariums’ Species Survival Plan (SSP), with a spotlight on our screaming hairy armadillos, Lenny and Rizzo.

In captivity, the screaming hairy armadillo population is dwindling. There’s a whole host of reasons for this, but the main ones are that there aren’t enough successful breeding pairs out there, coupled with low reproductive rates. Per the recommendation of the Association of Zoos and Aquariums (AZA), we’re crossing our fingers that Cupid’s arrow will fly and find its mark with our armadillos. Lenny, who you can find on exhibit in our Discovery House, and Rizzo, our back-of-house armadillo, are a part of a very detailed strategy for successful captive breeding. 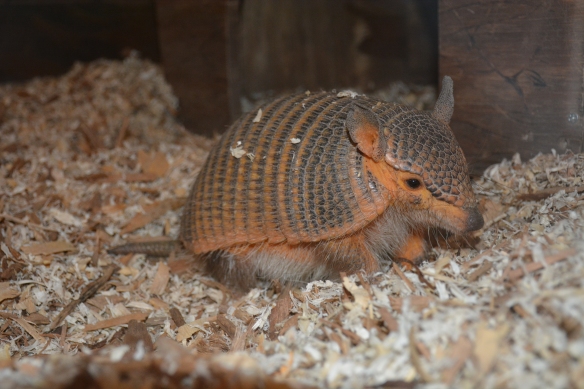 During Rizzo’s ovulation cycle, which occurs during only two seasons of the year, the armadillos are given up to two months together in hopes that the spark of love will ignite. Lenny will even spend his evenings in the back-of-house so that he and Rizzo can have more time together. Since gestation takes from 60-80 days, and if conception were to occur early on in her mating period with Lenny, Rizzo could give birth while still in the company of her mate. This leads to a high level of stress for the potential mother and could lead to her eating her offspring. To avoid these things, a pregnant Rizzo would have to be moved entirely out of Discovery House and taken to a low-stimulation environment in which she wouldn’t even be able to so much as smell her mate, Lenny.

When and if babies are successfully produced, litter size is small – typically just two pups, though singletons are not unheard of. The two are initially quite fragile, as babies are. So along with the obstacles leading up to a successful pregnancy, keeping the babies healthy and sustained can be a trial in itself.

The odds could seem insurmountable, but our keepers are doing everything they can to ensure the possibility of a successful breeding with our screaming hairy armadillos. With the help of AZA and our partners in other accredited zoos, we are learning how best to guide this species to a better future.