Last week, a volunteer group from Burlington Christian Academy worked with our horticulture team to clean up the bioremediation cell adjacent to our parking lot. (BTW, bioremediation cell is a scientific way of describing a landscaped area containing plants that remove heavy metals from parking lot runoff so these toxic chemicals don’t enter our water supply.) During this work, they stumbled upon – almost literally – a partially-hidden box turtle!

The GSC participates in the Box Turtle Connection, a long-term study of eastern box turtles to understand more about their status, trends, and threats, as well as to develop strategies for long-term conservation of the species. Any box turtles found on or around GSC grounds are added to the database.

We collected morphometric (which is a science-y way of saying size and shape)  measurements such as weight, length, and width, and we record sex and age. 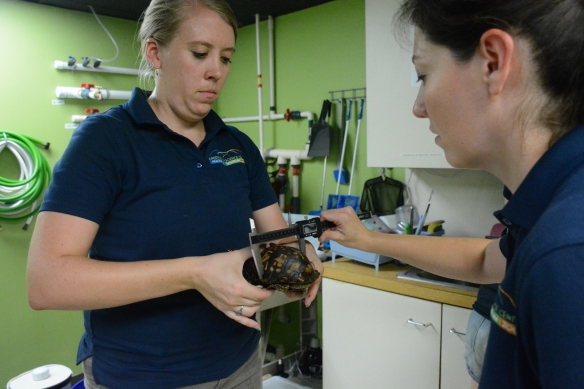 Using a turtle ID code matrix, we made small indentations on the turtle’s marginal and peripheral carapace scutes. In other words, we filed small triangles into the outer-most part of the turtle’s shell in a particular pattern that is specific to that individual. This acts as an identifier should we find this turtle again someday.

Finally, a small radio transmitter was affixed to this turtle’s shell so we can track its movements. The tag was adhered to the shell in a location that won’t impact the turtle’s mobility or ability to move through vegetation. Once the adhesive dried, the turtle was returned the same location it was found.

Box turtles hibernate over winter, so we will not attempt to radio-track the turtle until the weather warms next year. Using radio telemetry, we’ll be able to track the movements of the turtle. By knowing the GPS coordinates of the turtle’s movements we can better understand the territory this turtle has and how far it travels in the warmer months. All of this information adds to our collective knowledge of the eastern box turtle!

Why is this research important?

While eastern box turtles can be found across North Carolina, populations are declining from habitat fragmentation and road-related mortality – as well as from being collected as a pet. They are a long-lived animal (more than 25 years), so they take years to reach sexual maturity. Therefore, it takes a long time for them to recover from population declines. Collecting and interpreting data about these animals now can help us protect them in the future!

What should you do if you find a box turtle?

If you find a box turtle attempting to cross a road, never take it home! Instead, merely help it cross because it will continue to try and return to its birthplace. Box turtles have a homing instinct, similar to birds, so they return to the same location year over year to build nests.

This time of year box turtles are looking for hibernation spaces. In late fall or over winter – although it is uncommon – you may see one bed down in brush or plant debris. If you find a box turtle in cold weather, be sure to leave it be. Animals that hibernate drastically reduce their metabolism to survive the winter when food sources cannot easily be found. Arousing them from hibernation is dangerous because they won’t be able to replenish the energy it takes to come out of hibernation!

Last week, John Rucker came out to the Greensboro Science Center with his Boykin spaniels (AKA Turtle Dogs). The dogs have been trained to literally sniff out turtles. Before getting down to serious business with The HERP Project summer campers, John gave GSC staff a little taste of what his dogs can do. 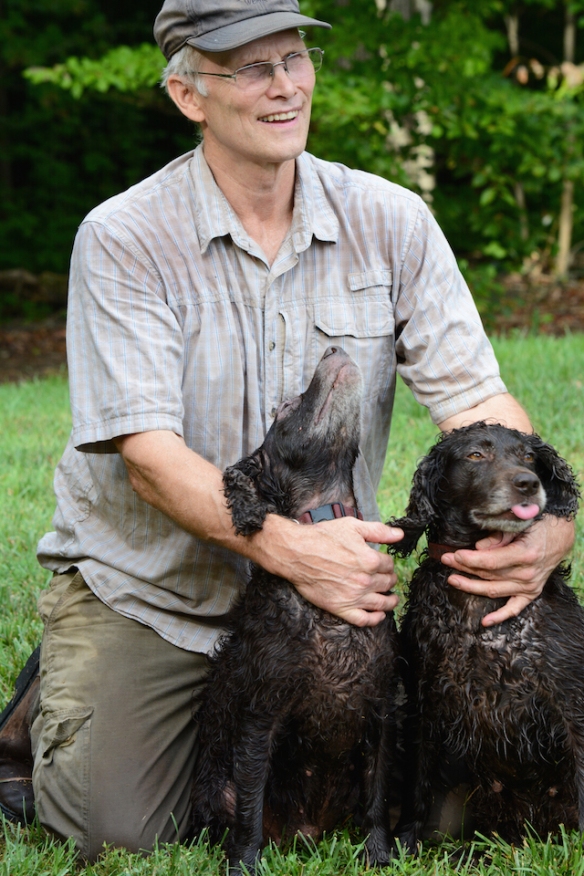 After a brief introduction, John said, “Find turtles.” The dogs took off! They ran around the edges of a pond, through thickets, and along a small stream on the hunt for their prize. After just a few minutes, one of the dogs, Jenny Wren, ran up to John with her catch in her mouth… Don’t worry, the dogs have been trained to be soft-mouthed, simply holding the turtle gently until John takes it from them. In a span of about 30 minutes, Jenny Wren and Mink found 2 eastern box turtles. 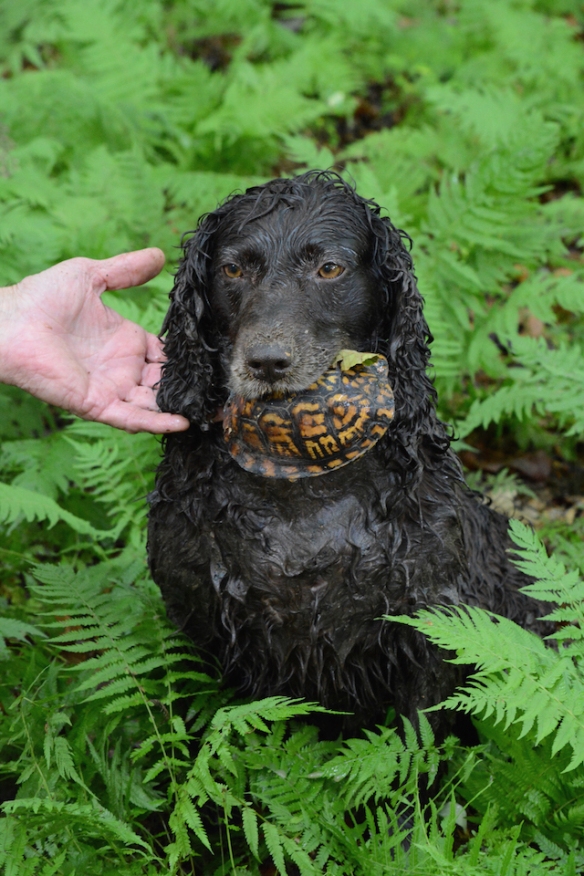 Jenny Wren with a box turtle

What did we do with the turtles?

The Greensboro Science Center is home to a 22-acre study zone for box turtles as part of the Box Turtle Connection. For the third consecutive year, GSC zookeepers have been finding turtles, taking photos and collecting data for the project, then releasing the turtles back where they were found. Data collected includes the turtle’s sex, life stage, length, height, and weight. 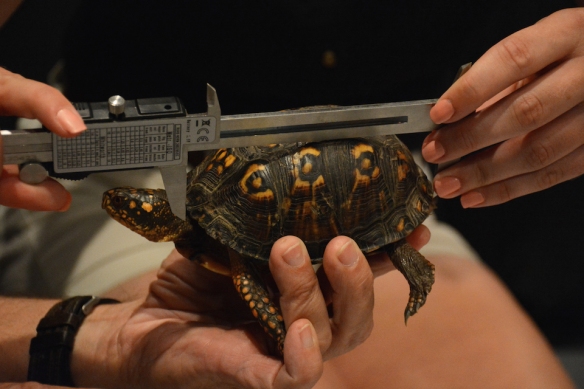 This information is added to a statewide database that will help determine the stability of box turtle populations. So far this season, six turtles have been found at the GSC’s study zone.

Want to get involved?

The Box Turtle Connection website offers a couple of different ways you can get involved, depending on what level of commitment you are able to offer the program. For more information about the project and to learn how you can get involved, visit their website: https://boxturtle.uncg.edu/.