We recently sent our VP Conservation & Research, Lindsey Zarecky, and one of our Herp Keepers, Audrey Stallings, to an ATAG (Amphibian Taxon Advisory Group) Amphibian Field Research Course. The course was taught by eight NC- and AZA-based instructors and attended by 18 participants ranging from researchers and keepers to amphibian enthusiasts. The course focused on amphibian field research techniques, with participants spending time in the field (including the Sandhills, the NC Zoo, Boone, and Grandfather Mountain) everyday for the duration of the course.

Zarecky and Stallings shared with us a few highlights of what they did during the program:

Zarecky and Stallings learned about each of the nearly 100 species of amphibians that live here in NC, as well as some of the major diseases that can affect them. There was even a test in which instructors laid out 52 specimens that participants then had to identify! Not only were they expected to identify many amphibians by sight but by listening to their vocalizations, too. 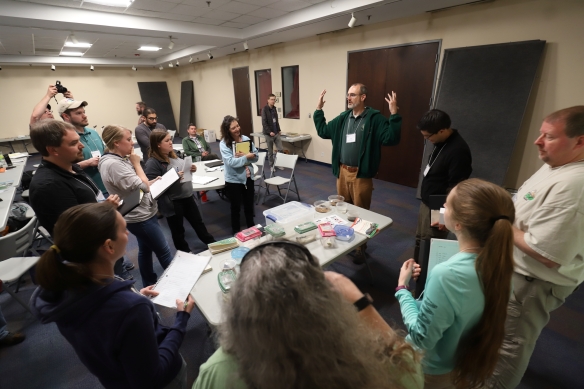 We’re very proud of our staff for continuing their education! Participating in programs like the ATAG workshop ensures that GSC is able to further its mission of conservation and research while offering you, our community, the best science education programming possible.